There was no shortage of finger-pointing and blame-passing, but one big takeaway was clear: We’ve barely scratched the surface of what happened on one of the most ignominious days in American history.

Republicans have tried to cast the January 6 attacks as an unfortunate incident, a moment when emotions ran high, many otherwise decent people were swept up in the fervor and things simply got out of hand. Rep. Kevin McCarthy argued that “everybody across the country has some responsibility” for the deadly violence on January 6.
Several House Republicans blamed Nancy Pelosi. Others equated an attack on the Capitol done in the name of the former president with sporadic violence and property destruction during Black Lives Matter protests.
When Democrats tried to hold Donald Trump accountable in impeachment hearings, Republican Sen. Mike Lee opined that “everyone makes mistakes, everyone is entitled to a mulligan once in a while.” Many rioters and their friends and family have made this same defense in court: That they were simply very passionate, if very stupid.
Read More
But stupid people caught in the heat of the moment don’t typically find that Tasers and zip ties materialize in their hands out of thin air.
“These criminals came prepared for war,” said former Capitol Police Chief Steven A. Sund, testifying that he believes the violence was preplanned and well organized. Testifying along with him were former Senate sergeant-at-arms Michael C. Stenger and former House sergeant-at-arms Paul D. Irving.
Sund and other law enforcement officials noted that the rioters seemed to have a basic understanding of how they could strike when law enforcement was at their thinnest, that they came equipped with items that one would not expect to find at a peaceful protest == bear mace, climbing equipment, tactical gear — and that the attackers appeared to use coordinated hand gestures to communicate.
Two explosives, Sund said, had been placed near the Capitol perimeter, and he believes those may have been intentional distractions to divert law enforcement attention away from the Capitol building as rioters attempted to sack it.
As they contended with insurrectionists shroud in military paraphernalia, many Capitol police officers lacked riot gear and had no training on how to respond to a horde storming the Capitol. 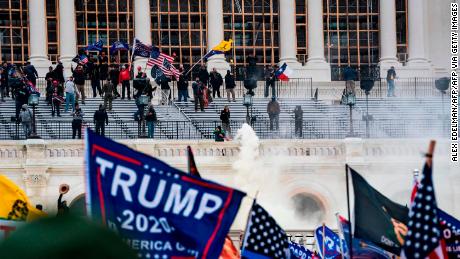 How I felt seeing guys like me at the Capitol riot
All three men denied having seen an FBI report issued the day before the attack that warned extremists were traveling to Washington in pursuit of “war,” and that the extremists had shared maps of the Capitol complex’s tunnel system.
According to the report, one social media thread said, “Be ready to fight. Congress needs to hear glass breaking, doors being kicked in, and blood from their BLM and Pantifa slave soldiers being spilled. Get violent. Stop calling this a march, or rally, or a protest. Go there ready for war. We get our President or we die. NOTHING else will achieve this goal.”
Acting Metropolitan Police Chief Robert Contee said another compounding problem was that the Defense Department hesitated in deploying the National Guard. He was “stunned,” Contee said, at the foot-dragging. The men disagreed with each other on the timeline of requesting National Guard intervention, and who asked for what when, but it’s clear that the guard was deployed far too late.
Also clear: Rank-and-file officers are the ones who still bear the scars of these failures.
Capt. Carneysha Mendoza of the Capitol Police testified that she was gassed with what she believes to be military-grade tear gas that was “mixed with fire extinguisher spray deployed by the rioters.” Rioters nearly broke her arm, and she sustained chemical burns to the face which still have not healed.
Capt. Mendoza is sadly representative of so many officers caught in the crosshairs that day: According to the police union, some 140 officers were injured and graphic body camera footage shows officers being beaten and crushed by heaving hordes of rioters as they scream for help. Two officers who were at the Capitol that day have since died by suicide.
The failures clearly started at the top, with a federal government that did not want to take these threats seriously because they came from supporters of the president who were responding to his encouragement and his lies about widespread election fraud.
To hear these four men tell it, they were left unprepared and in the dark — which is not an excuse coming from the Capitol’s top law enforcement brass, but certainly raises questions about who else contributed to this deadly ignorance.
And the lack of communication and dearth of understanding of the scale of the threat is truly shocking, given that reporters, researchers of the far right and average folks online were sounding the alarm about the potential for violence at the January 6 event well before it happened.
Tuesday’s testimony was disturbing and enlightening. No huge new bombshells were dropped, but the contours of the story were sharpened.
And what’s coming into focus includes and goes well beyond law enforcement failures and calls into question decisions made by our country’s top security and defense agencies, and our most powerful leaders.