“After much prayer and reflection, Bonnie and I have decided that we will not enter the race for the United States Senate in Georgia in 2022,” Perdue said in an email to supporters Tuesday, adding that it’s “a personal decision, not a political one.” He did not further explain his decision.
Perdue vowed to do “everything” he could to ensure that the Republican nominee for the race beats newly elected incumbent Sen. Raphael Warnock, who said later Tuesday that he’s “prepared to defeat whatever Republican they come up with.”
“These two current liberal US Senators do not represent the values of a majority of Georgians,” Perdue said in his statement, referring to Warnock and Sen. Jon Ossoff, who defeated him and former Sen. Kelly Loeffler in the January runoff election. 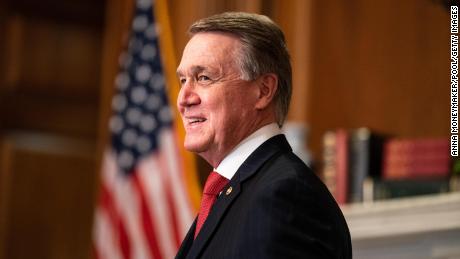 David Perdue files paperwork to run in 2022 Georgia US Senate race
Last week, Perdue met with former President Donald Trump over a round of golf and dinner, according to The New York Times. Trump was reportedly intent on getting back at Senate Minority Leader Mitch McConnell and Georgia Republican Gov. Brian Kemp, who have respectively blamed Trump for fomenting the January 6 violent riot at the Capitol and disputed his false claims that the 2020 election was rigged.
Read More
A person familiar with the Trump-Perdue conversations said it did not affect the former senator’s 2022 decision. But Trump’s war against Republican leaders could hurt the party in the 2022 midterms, just as it did in Perdue’s Senate race. Last month, Trump publicly pledged to campaign against Kemp in 2022, which could drag down Georgia Republicans on the ballot.
A former CEO of Reebok and Dollar General, Perdue won his first Senate race in 2014 and became one of President Donald Trump’s strongest allies in Congress. He ran on delivering aid during the coronavirus pandemic, including billions for hospitals and Congress’ creation of the small business loan Paycheck Protection Program, while warning voters that Ossoff was pushing a “socialist agenda.”
But Trump’s stream of attacks on Kemp and the election officials who oversaw his loss in Georgia took away a potential message for Perdue and Loeffler that they would keep the Senate in Republican control, and serve as a check against President Joe Biden’s administration. Instead the senators joined Trump in opposing the certification of the 2020 election, putting off some potential swing voters.
Perdue also faced intense scrutiny over his multi-million-dollar stock trades made during the pandemic. Perdue said that his advisers made the transactions and pledged that they would no longer trade in individual companies. His campaign also faced a backlash after he willfully mispronounced Vice President Kamala Harris’ name at a rally and for a digital ad showing Ossoff’s nose enlarged, an anti-Semitic trope, that his campaign said was an accident and quickly removed from Facebook.

Miscalculating Sinema and Manchin could end up costing Biden

Going maskless is a key factor in Covid-19 outbreaks at gyms, studies say

That didn’t take long. Manic markets are back again

How to make sense of the minimum wage debate